Stellarium, the sky inside your computer


Two new versions in just a few days: I'm talking about the popular software named Stellarium , which lets you explore the heavens, taking advantage of a large database that includes more than 600,000 stars (with extra catalogs of more than 120 million items!), with the representation of the constellations, images of nebulae (full Messier catalog), realistic representation of the Milky Way, planets and satellites. Stellarium also includes realistic effects of sunrise and sunset, zoom controls telescope, and much more ...


...  Briefly, there are so many interesting features that even those vaguely fond of astronomy can be convinced to try it! 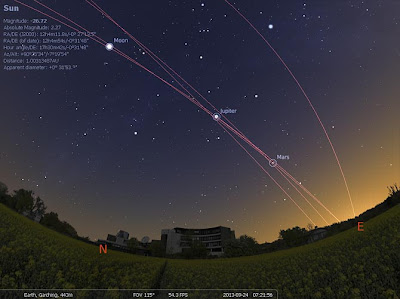 Version 0.10.3 has been released on 29 of January, with new features like plugins that allow to predict the position of artificial satellites, and a database with constellation for twelve different cultures.. and many other thinks that you'll be glad to discover by yourself ;)
Version 0.10.5 has been released just some days ago; it features the correction of a lot of bugs, a reduced loading time and other improvements.
Stellarium is available for all the major operating systems (Windows, Linux and Mac OS X), it's free and open source. Binary packages for Ubuntu 10.04 are now also available from their website. Could you ask for more...?
Stellarium website is www.stellarium.org
By Marco Castellani a June 12, 2010