Amarok is definitely a great player for linux. This wonderful software just reached version 2.3.0, code-named Clear Light (which, being a fan of Mike Oldfield, makes me immediately think of this music, like Amarok that obviously makes me think of this wonderful disc. ..).
Anyway, at the risk of alienating a good portion of my (limited) audience, I'd venture to say (also following a commentary that appear belows the video presentation on Youtube) that Amarok is perhaps not yet at the level of competing on equal terms with well known player for other operating systems such as iTunes.

That said, it also worth to say that it is still a complete and rather powerful software: certainly for KDE users it represents  a great and rewarding choice, that can contribute greatly in making the desktop environment more comfortable, also in terms of management of a user's collection of audio files (as well as Internet radio and podcasts, which in passing is a recently reinforced section)

The video itself is quite pretty and the accompaining music is itself really enjoyable .. which is surely a good think, for a multimedia player presentation! ;-)
By Marco Castellani a March 19, 2010

I'm not sure if it's already well known, in the community of Ubuntu lowers. Anyway, I just discovered it today: namely, the Firefox default page in the next release of Ubuntu (10.04, code name "Lucid Lynx") is already online, and it features a search box that it's not more provided by Google, but instead by Yahoo!
Here is the screenshot of the Firefox default start page in the current Ubuntu release:

To switch to the page of the next Ubuntu, you simply have to change the following URL:

to this easily guessed URL:

and you'll be greeted with the following webpage:

Update: I've found the post that talks about the change of default search provider, on the Ubuntu developers list. I easily stumbled upon the page after a quick Google search.. can't help but notice that Google is (still) my friend ...;)

Well, I came to the conclusion that it's time to add some bytes of music to patch.panel. After all, music is something that can easily run - in its digital form - trough wires, panels and similar stuff... ;)

A friend of mine shared this wonderful song, a cover beautifully played by Peter Gabriel. I find that both music and worlds are wonderful: this video present a static image, so you can better concentrate on the worlds.

It 'a shame that the microblogging platform Qaiku still has not found - in general, and in the Italian community in particular - the credit it deserves (in my humble opinion), in light of the features and flexibility of its structure (less minimalist but far more effective than Twitter, just to make a quick comparison between the most diffused platform).
Features such as thematic groups, the possibility (really unique, for what I know) to select the language for messages, or sending images (and now, after the restyling, also more general attachments)... not to talk about the evolved conversational models (inspired to Jaiku, it features the possibility to add real comments to posts, with a build in notification mechanism to inform other participant about your reply)... these are things that might lead someone to a more careful analysis of the platform (which incidentally has been already translated into Italian for the most part, guess who did it...) 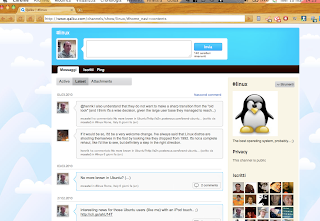 This week Qaiku went offline for a few hours, after which users have been surprised to find a substantial "refurbishment" of the site, which just recently celebrated her first birthday.
I followed the adventure of Qaiku from the earliest times (I am still convinced that I was the first to post a message in Italian, to say one thing). I was already there when the infrastructure had just gone out from the "internal" test phase. Time slowly brought a lot of interesting improvement over the original project, but the user base - at an international level (Qaiku is rather strong in Finland, its native country) - perhaps did not expand as the structure deserves.
Now it seems that good things are happening, for Qaiku. Among others, maybe you'll be glad to know that Ubuntu users can rely on Gwibber - a microblogging client already included in Ubuntu 9.10 - as a powerful tool to access the service, without even having to open a browser.
On this occasion, we publish here a screenshot of the Linux group (which, as any other group, can work selectively in Italian, English or any other language) .. you never know , maybe someone wants to join us ...
By Marco Castellani a March 12, 2010

If Qaiku was famous like Twitter, now the whole web would be talking
about the maintenance status of the service ;)
Anyway, let's hope that after the upgrade we, as Qaiku users, can
benefit from some new feature!

Posted via email from Signal 2 Noise
By Marco Castellani a March 09, 2010

No more brown in Ubuntu desktop? Anyway, I must recognize that the posted screenshots are pretty.... It seems that Ubuntu is succesfully shaping a path toward a "clear" and fresh new style.
The new layout let you understand that there is something "new", without loosing completely the old and widely accepted look & feel. Well done Ubuntu!
Posted via web from Signal 2 Noise
By Marco Castellani a March 04, 2010