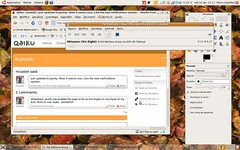 My Ubuntu 9.04
Inserito originariamente da mcastellani
I should admit that the upgrade to the most recent version of Ubuntu wasin my case a nice surprise. First of all, it took place in a really
simple and unproblematic way. Second, after the reboot of my system (a"not-so-new" Acer Aspire 3634 laptop) I discovered with pleasure thatthe "suspend mode" was now fully supported!

Another "out-of-the-box" nice suprise (which came completely unexpected) was the gained "two finger" scrolling mode in the touchpad (I can now scroll long pages with the coordinate movement of two finger, in the same way Max OS works). Really a great feature, enough to make me prefer the boot with linux in respect to Windows ;)

I just want to stress that all this took place without abstruse operations from the command line: this is surely a good thing, since for too long has been suppose that Linux was good for "geek" people and not for the majority of "normal persons"; I mean, persons who mainly use the computers to work or play, but normally do not dream at night (or, every night...) how to install the latest GNOME test release just got from the CVS repository.. ;)

I did appreciate also the new notification system (ok, it seems has been copied from Max OS.. but if something is good, why not to copy it?), working with a semitransparent window that opens at the top right of the desktop. Very useful, and I just discovered applications that take fully advantage of this new feature.

Overall, my assesment is (as you can easily guess) quite positive.
Let's admit, linux on desktop has done many step forward in recent years (and I can certainly say it since I am following it from a good amount of time...). In my opinion, if the hardware is properly recognized and managed (which in passing may still be a problem in many cases, since modern computers came with a lot of different devices, microphones, sound, graphics, 3D accelerations.. in many cases with proprietary drives) nowadays a computer (or laptop, or netbook) with a modern version of linux correctly installed, is not second to any other alternative, including not only Windows but also Mac OS X...

Email ThisBlogThis!Share to TwitterShare to FacebookShare to Pinterest
Etichette: linux

Orange (or lemon) juice and microblogs...

Reflecting on the different models of microblogs (those websites where you send frequent status updates, usually no larger than 140 characters), it seems to me that there is, beyond the subtle distinctions between the various platforms, a basic distinction can be made between two types of conversational models: one in which you can add actual comments to a given status, and another where you can only comment by "answering" with another status message, addressed to the person you want to respond.
Undeniably this latter model is by far the dominant, being adopted by Twitter (and in quite similar manner, also by the most recent Identi.ca), absolutely the first in terms of user base, when compared to all competitors. The "problem" (if we want to call it in this way) is that Twitter was not born as a tool for conversation: conversely, are the users themselves who invented the basic outline of "response", in adopting the convention now widely known to precede the username with "@" to indicate that a certain status is in response of the status of the given user.

Twitter itself has many advantages and peculiar characteristics, but here I want just to highlight how the conversational model is adopting may sound restrictive in many cases. Just an example, to clarify my point: let's suppose that - taken a beautiful day by a irrepressible curiosity - I write down in my preferred microblog the question "do you prefer orange or lemon juice?"
If I am in a Twitter-like microblog, each user will respond with a message in his own microblog, with a link to my question. My dear friend (so to say) Ciccio Baciccio - which closely follows all my status updates - will see, however, only those responses whose extenders are by chance also his contacts. Those of others (which I do not reply directly to my turn, then producing a link to them) are not visible at all, for Ciccio Baciccio. He can't even guess their number. Not a great problem, ordinarily. Unless he is interested, for some reason, to the full spectrum of responses to my important question, regardless of who is the sender of the items.
On the other hand, on a "conversational" platform, all the answers collected so far would be present, sorted by time, appended to my original post. And readily available, without having to "jump" from one site to another, in addition. Imagine a post that collects enough feedback (here is an example in Jaiku, or another in Qaiku), how might it became a complex thing in Twitter (for the latter of course I can not put a link, bacause is not contained in one page only).
This is not to say that one approach is necessarily better than the other: instead, it is conceptually different (it's not correct to compare apples with pears, as they also teach at school).

Anyway ... it is also true that everyone knows how frustrating is trying to reconnect the wires of an extended conversation on Twitter, or also keep tracks of what happened if by chance you has been away for a while ...
What do you think about it? Can it be a real problem for Twitter, or the model for which the replies and the posts belong to the same category, will win anyway? After all, not always the "best solutions" are the ones who win (I am lead to think of the history of VHS vs. Betamax, for instance, or of the diffusion of Windows compared to OS X and Linux...)

Derived from an original post in Italian (with a little help of Google Translator)
By Marco Castellani a April 19, 2009 No comments: