We hope you'll share in our enthusiasm as today we unveil a simple service we're calling Promoted Tweets. It's non-traditional, it's easy, and it makes a ton of sense for Twitter.

Twitter makes its first moves toward advertising. Personally, I do appreciate the honesty and transparency that comes out from the blog post. Anyway, I wonder what will be the response of the community...

A guest post by Flavio Castellani
We all hate Microsoft for its amount of money making, its weight in the consumer market and for much more.
And we all love Google, for its fresh spirit, its apparent disinterested way of adding value to our technological experience and, ultimately, to our lives.
And yet, Google is arguably going to make much more money than the evil Microsoft. It's already controlling (as a monopoly) the Internet business on a scale beyond imagination. You don't hear about microsoft interacting with nations and government legislative organs, like google does for clearing the path to its operations. You don't hear (yet) glamorous cases of antitrust sentences turned bad against google.
The most important thing: Microsoft gained our hate for the way their products made us feel, and for the control on what we use to surf the net.
But while we recognized and reproached Microsoft for their attempt in controlling the browser we use to surf, google increases its control on the content of it. Every day, we let increases its control and dictate more and more not just the experience on how we access the information, but the accessibility to the very information itself.
Do we think that the free gadgets and applications are really for free?
this is like believing that the free drinks in las Vegas are really for free.
Google now has tentacles in mobile networks and operators, fiber optic network and ISP providing, Internet, mobile devices and expanding.
There is something confusing about so many free applications and services, and yet a stellar share value trend in the stock market exchange.
The way I see is this: to run a business you need to have
This is the archetype of business. Is the minimum denominator any business have in common, and upon which they are based on.
How does it map to Google way of making money then?
For MS office the revenue stream is the classic one and much simpler:
Google is not a bad thing. It's just a huge thing now. And huge corporations relentlessly pursue the increase of their shares value in the stock market.
Above a certain critical point, the direction of a corporation drift to whatever direction satisfies its goals. 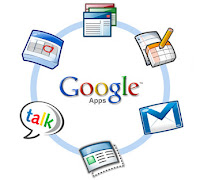 Image Credit: Google
Google contribution to civilization (I'd adventure to say) is remarkable. But it's clear that this contribution is not its goal, is its mean to get to its goals. its goal is profit ($$$) from internet advertisement. That is what pays the freebies, and the immense funding in R&D to expand in mobile, voice, ultra-fast fiber ISP, video, authoring and whatnot.
Until its means and its goals matches with our interest, that's great. But we need to be careful to see well all the parameters of the equation.
Google strives to position itself more and more as the internet content syndication provider for the general population. That takes away the beauty of the internet, and more sadly, diminishes its distinguished characteristic that opposes it to television.
Internet is truly the most significant informational achievement in the past 100 years. We must fear any monolithic entity that seek control over it, for lucrative scopes. My believe is that Internet is a solid answer to the past decades of the informational unbalanced entry point created with the advent of television, which generated a chain of consequences that lead to a corrosion of the democratic political debates and to an increase of influence of corporations in the nations public and political matters.
Internet could bring a ribalancing and galvanize the spirit of the debates. Its general access point for content authoring enable it to be the future arena where ideas can truly democratically compete, assuming they remain equally accessible.
[Flavio Castellani]
By Marco Castellani a April 02, 2010